However it is you are welcoming in the new year, be safe. See you on the flip side!!

The doctors seem to think that she just has severe acid reflux, and because she is so tiny and is still trying to “learn” to swallow she was aspirating her milk into her lungs, thus causing her to stop breathing.

She was sent home with an apnea machine so they will know if she does it again.  She also can not sleep on a flat surface, she needs to be at a slight angle so she will sleep in her swing or bouncer.

This is better than any Christmas present any of us could have asked for.

Poor baby. She looks peaceful sleeping in a bouncer type chair (inside her crib) wrapped up snug as a bug in all her little blankets.

Its when you take the blankets away that your heart just breaks.  She has been poked and prodded so many times she looks like she had a fight with a mean ol’ alley cat.

Baby M has, among several others tests, had a spinal tap and an upper GI.   The doctor has assured them that they will be taking Mady home, and whatever it is that has been causing her problems is not fatal or life threatening.

As of right now they are waiting for the rest of cultures.  If at the 24 hour mark they are clear, they might just get to go home TONIGHT! If they show infection they will be staying for at least the next 2 weeks as she will need IV antibiotics.

Thank you all for your prayers and warm wishes – if you can muster out just a  few more that things come back clear I know they would be much appriciated by all.

I will be back with an update as soon as I hear how her cultures look.

This is baby Mady. She is baby 4 of 4 in the great baby explosion that we have been so blessed with this year. Mady was born Thursday night and came home yesterday (Saturday) afternoon.  They were only home a few hours when she stopped breathing. Her daddy did CPR until the first police officer arrived. The paramedics took over from him once they arrived. Mady was rushed to the hospital via ambulance. On arrival at that hospital they realized she needed to be in a hospital with a NICU. Mady was then sent by medical helicopter to the 2nd hospital.

Mady’s mommy is my best friend and it is absolutely horrible to listen to the anguish in her voice.  The road to Mady was long and difficult for them. My heart is breaking sitting here willing my phone to ring, waiting for yet another update.

Please, with all that is in me, I am asking for your prayers, good thoughts, good vibes, fingers crossed, whatever you have within you to offer, keep Mady in them. 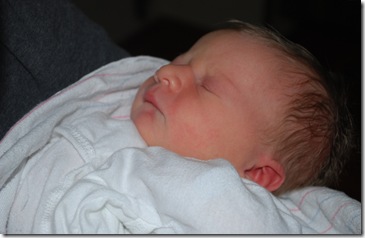 You will grow up soon enough. There is no reason for you to be having sleep overs away from home and taking helicopter rides before you are old enough to remember them. I love you very much and hope you feel better soon.

The first time it didn’t bother me, I figured they need to go potty.  It was raining when we went to bed and they didn’t want to go out. I was happy they didn’t go on the floor.

The second time I wasn’t as understanding.

The third and the fourth time, I sent Hubs.

At about 3:30 and who knows what number trip down the stairs it was, Thing 2 decided since Mama was up she would like a cookie. I am sure she would have preferred breakfast but she quickly opted for plan B when I told her it wasn’t time to eat.

Naughty dogs that keep Mama up all night do not get cookies either.  I guess she showed me because then the barking started about every 10 minutes.

I have no idea what the problem was.  It had better have been a one time deal.  Or we may never have cookies at our house again.

I had lunch with 2 of my partners in crime  very good friends from college today.

This morning when I woke up it was pouring down rain and knew it was going to be a bad hair day*. I kinda worried about it for about .2 seconds and then I told myself – Like these people care, they had held your hair before when you were puking your guts out. Thanks self, and guess what? I don’t think they cared in the least bit.

I was not smart enough to bring my camera, but they both did so I am sure the pictures will turn up on Facebook.

We have all come a long way. We have gotten married, had babies, gotten “real” job, just plan grown up I suppose. We fought over who got to pay for lunch – before we would have been trying to figure out who had enough credit left on their meal cards to even go to eat, let along buy for anyone else.

It has been close to 15 years since we quietlyroamed the residence halls like screaming banshees together but as we sat there it was just like it was yesterday.

We were fortunate that although we were always doing something to get in a least a little bit of trouble, we never really got caught.  Except for that one time…..

My god we were so stupid. We had been out (in the forest) drinking (all of us underage) and as we came back onto campus we got pulled over. I imagine we were swerving like crazy. ( No, none of us should have been in a car let alone driving). As the campus police came behind us and turned the lights on He started throwing beer cans out the window. We were in a pickup with a covered cab. I was laying in the back with E and J and to say we were scared wouldn’t begin to express the fear that had washed over us. Somehow He managed to talk his way out of it all.  Funny now, maybe not so much that night. I think we learned our lesson with that. Not so much with putting ice in each others beds, toilet papering rooms, putting open condoms on each others doors, stealing clothes from the dryer. (Each others, no one else’s). The list goes on and on.  Did you know that you can make mac and cheese in a hot pot? I couldn’t even begin to count how many we ruined with that bright idea!

I would do that part of it all over again in a heartbeat.

I miss them like crazy. CRAZY I tell ya.

Who knows when we will see each other again. Hopefully sooner rather than later, but if not, at least we all know we can pick up right where we left off again.

*(I also had to go to the dentist this morning and we all know they dont give a rats ass about your hair. The dentist did tell me that I am wearing my retainer TOO much. WTF? Who does that? OCD me of course. And just so you know I called my mother as soon as I was done to point out he told me that and that I was sure that my brother couldn’t even remember what color his retainer was, let alone (if he knew where it was) even get into his mouth anymore. Hey, its almost Christmas.. one of us still has to be the good kid).

This morning all in less than an hour I received a text message, an email, and a phone call from MY DENTIST confirming my appointment for next week.

Either times are tough for him or he remembers what a chicken shit I am and thinks I am not coming in.

Leaping Before I Look